An Introduction to Elaston Scientific

This website is devoted to a new paradigm – Elastonic cosmology. Current mainstream cosmological theory – Concordance Model or Lambda-Cold Dark Matter (ΛCDM) model is in general agreement with the observed phenomena. However, it has some theoretical problems: the fine tuning problem, the coincidence problem, the unclear nature of dark matter and dark energy among others. Also it suffers from the problems explaining increasing number of specific astrophysical observations.
The presence of contradictions, in itself, is not a big problem as a theory is not a dogma. The contradictions of a good theory help to raise correct questions for a subsequent progress of scientific comprehension.
It should be noted at this point that scientific process has one specific complication. On one hand the scientific community has to be conservative to prevent random unmotivated changes of firmly established conceptions. On the other hand the mainstream, trained on scientific control, launches inadequate attacks on the new ideas. It is similar to an autoimmune reaction of organism to its own cells.
Creation of new hypotheses is an integral part of a research process. In the Theodor Gomperz’ comments on Aristotle we read:
“And not Aristotle’s piety towards his master Plato, not the deep gulf of dissent that divided him from the atomists prevented him from crowning Democritus and Leucippus at the expense of Plato with an incomparable crown of eulogy. Their theory of nature, too – such is the drift of his remarks – was marred by great defects, but it was based on a hypothesis ripe with valuable conclusions. The following was the difference to be noted. The habit of natural observation induced the faculty of building hypotheses to connect long series of facts with one another. That faculty was diminished by predominant intercourse with mere concepts which alienates us from reality, contracts our vision on a narrow circle of facts and leads us through such straits of observation to the formation of inadequate theories.”
It is necessary to note that there are many hypothetical ideas in modern astrophysics and cosmology. Here are some of them:
Hypotheses can not be superior or inferior. They are equal as long as some of them are falsified and others are proved to be true. Until that they are hypotheses. The problem is that a mainstream assumes the right to sort hypotheses on “true” and “wrong” and what is worse to “forget” that some of them still not proved to be really true. Eventually some of the “favored” hypotheses become “real entities” without strong grounds. One good example is a hypothesis of black hole.
In the history of science there have been long periods of time when wrong paradigms were respected by mainstream as absolutely correct. Good example is Ptolemy’s model.
The current moment in the theoretical cosmology is very frustrating. There is a consensus that the GR is a base of this science. Almost all the papers in this field, independently of brave introductive statements, have one final conclusion that the results of investigation are in perfect agreement with GR. If it is so, and GR is a final and invariable truth, then it is unclear why these theorists write their numerous papers. What is the purpose of their investigation? May be these scholarly works are only anthems?
A mainstream position is quite clear – new paradigms are usually unsuccessful. So why bother with junk ideas. Again, when they are successful they lead to the large scale changes in the scientific worldview and this creates a needless headache. Probably the greatest barrier to a paradigm shift is the reality of paradigm paralysis, the inability or refusal to see beyond the current models of thinking.
Thomas Kuhn in his Structure of Scientific Revolutions gave the following reasons for this inability:

1. Proponents of competing paradigms have different ideas about the importance of solving various scientific problems, and about the standards that a solution should satisfy.

2. The vocabulary and problem-solving methods that the paradigms use can be different: the proponents of competing paradigms utilize a different conceptual network.

3. The proponents of different paradigms see the world in a different way because of their scientific training and prior experience in research.

It is amazing but all these attributes of human spirit can be traced throughout human history. First, some quotes about freedom to advance hypotheses:
“In questions of science the authority of a thousand is not worth the humble reasoning of a single individual”
Galileo Galilei, 1632
“There must be no barriers to freedom of inquiry ... There is no place for dogma in science. The scientist is free, and must be free to ask any question, to doubt any assertion, to seek for any evidence, to correct any errors. … We know that the only way to avoid error is to detect it and that the only way to detect it is to be free to inquire. And we know that as long as men are free to ask what they must, free to say what they think, free to think what they will, freedom can never be lost, and science can never regress.”
Robert Oppenheimer, 1949
Second, here is what was said about the fortune of new paradigm by the battle-hardened fighters participating in the important scientific battles.
“Suppose, then, that all men were sick or deranged, save one or two of them who were healthy and of right mind. It would then be the latter two who would be thought to be sick and deranged and the former not!”
Aristotle, 340BC
“There is nothing more difficult to plan, more doubtful of success, more dangerous to manage than the creation of a new system. The innovator has the enmity of all who profit by the preservation of the old system and only lukewarm defenders by those who would gain by the new system.”
Machiavelli, 1513
“It was said by Borgia of the expedition of the French into Italy, that they came with chalk in their hands to mark out their lodgings, not with arms to force their way in. I in like manner would have my doctrine enter quietly into the minds that are fit and capable of receiving it; for confutations cannot be employed when the difference is upon first principles and very notions, and even upon forms of demonstration.”
Francis Bacon, 1620
I wish, my dear Kepler that we could have a good laugh together at the extraordinary stupidity of the mob. What do you think of the foremost philosophers of this University? In spite of my oft-repeated efforts and invitations, they have refused, with the obstinacy of a glutted adder, to look at the planets or Moon or my telescope.
Galileo Galilei
“A new scientific truth does not triumph by convincing its opponents and making them see the light, but rather because its opponents eventually die, and a new generation grows up that is familiar with it.”
Max Planck
"The history of science teaches that the greatest advances in the scientific domain have been achieved by bold thinkers who perceived new and fruitful approaches that others failed to notice. If one had taken the ideas of these scientific geniuses who have been the promoters of modern science and submitted them to committees of specialists, there is no doubt that the latter would have viewed them as extravagant and would have discarded them for the very reason of their originality and profundity. As a matter of fact, the battles waged, for example by Fresnel and by Pasteur suffice to prove that some of these pioneers ran into a lack of understanding from the side of eminent scholars which they had to fight with vigor before emerging as the winners. More recently, in the domain of theoretical physics, of which I can speak with knowledge, the magnificent novel conceptions of Lorentz and Planck, and particularly Einstein also clashed with the incomprehension of eminent scientists. The new ideas here triumphed; but, in proportion as the organization of research becomes more rigid, the danger increases that new and fruitful ideas will be unable to develop freely. Let us state in a few words the conclusion to be drawn from the foregoing. While, by the very force of circumstances, research and teaching are weighted down by administrative structures and financial concerns and by the heavy armature of strict regulations and planning, it becomes more indispensable than ever to preserve the freedom of scientific research and the freedom of initiative for the original investigators, because these freedoms have always been and will always remain the most fertile sources for the grand progress of science."
Nobel Laureate Louis de Broglie, 1978
So, nothing is new under the Moon. However, the speed of progress now is not comparable with the progress on the Ptolemy’s era. During the last half of a century the humans’ observational ability increased dramatically. Observers reveal new cosmic objects and phenomena almost daily. The richness and beauty of cosmic milieu are absolutely staggering. It would be very strange if this entire observational resplendency didn’t lead us to the new hypotheses. One of such hypotheses is an Elastonic paradigm. The guiding principle for its development was the claim of Leibniz:
“… the most perfect World, that is, the one which is at the same time the simplest in hypotheses and richest in phenomena”
that is in an absolute agreement with Ockham's razor:
"Plurality should not be posited without necessity",
or as regards the scientific model:
"Theories should be as simple as possible to cover all the facts, but no simpler."
We pay attention that this paradigm is, in its present form, not a cosmological theory. It is a general model that allows making qualitative analysis of the wide range of astrophysical phenomena. It was tested on a large number of observations however to become quantitative theory it needs intensive development. Our interpretation of scientific process is not compatible with the thoughtless journey en route for the scientific vogue. We invite everybody who interested in participating in subsequent development of this model to join us. Semi popular exposition of our model can be found in Explanation. The references to some papers which set out the basic principles of Elastonic Cosmology are discussed in Publications. 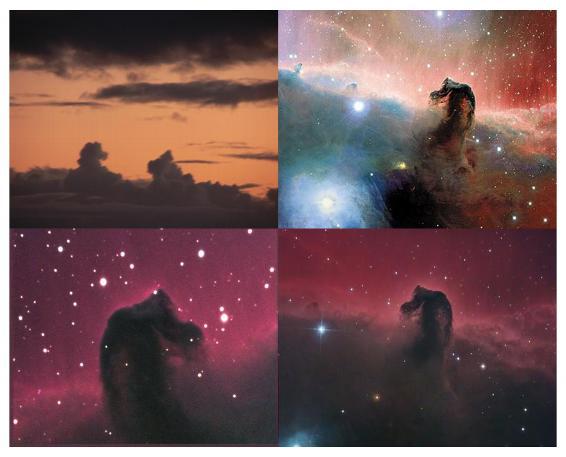